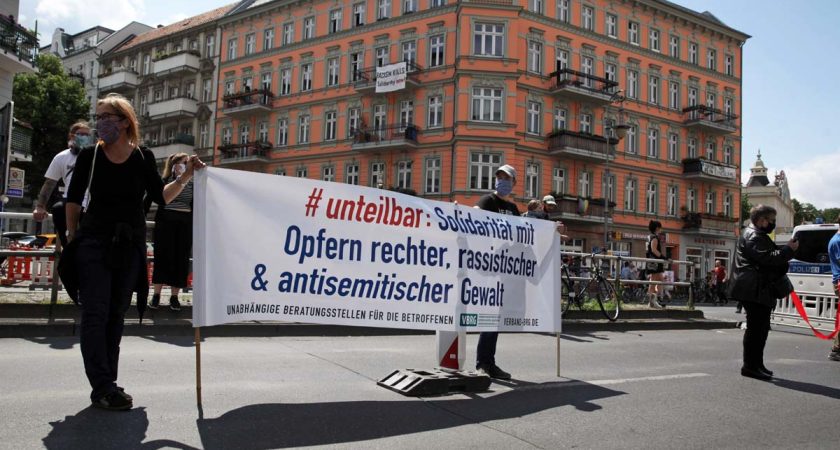 14.6.2020 – “Indivisible” demonstration: Speech by ‘Réenchanter l’Afrique’ at the Band of Solidarity

In the current “Corona crisis” there is a lot of talk about ‘solidarity’. Does it apply to all people?

Our solidarity today is especially for those who are invisible, who live in the shadows of society.
People who fled to Germany from poverty, oppression, persecution, dictatorships and war. They hoped to find better prospects for the future here. They want to learn the language, find work and a place to live, support their families and relatives and lead a self-determined life.

This is often denied them. Instead of being welcomed, they are only ‘tolerated’ and have to live in undignified conditions for years:

First the often traumatising experiences in their home countries and on the run, and now these experiences in Germany. Many become ill from this, are desperate, plagued by nightmares.

In our group ‘Réenchanter l’Afrique’ there are also people who have had these experiences. And many thousands are still going through them. Untold numbers are forced to live here without papers – completely without rights and particularly easy to exploit. And also ostracised as ‘criminals’.

Article 1 of the German Basic Law states: “Human dignity is inviolable. Everyone has the right to free development of his or her personality.

We find it intolerable that these basic rights do not apply to refugees.

And we find it unacceptable that freedom of movement, the right to determine one’s own place of life, only applies to people from the rich industrialised nations and not to people from Africa, Asia and Latin America.

Let us ensure that it is also experienced by those who live invisibly in the shadows of our society and that their undignified living situation is repeatedly named publicly.