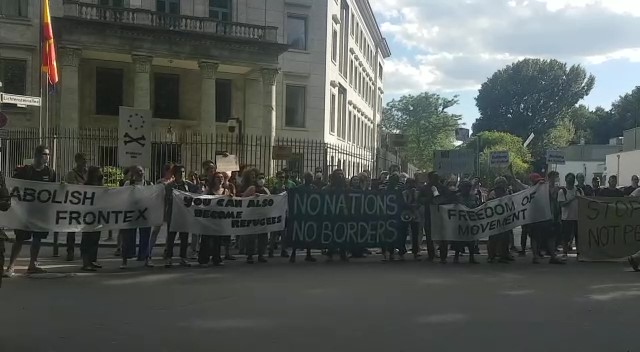 As many times before, once again migrants and refugees have died at the European borders. They were brutally attacked in Melilla at the border to Spain by Moroccan border guards and many were even beaten to death!

These people are fleeing from war, poverty and lack of prospects, which the EU has created and maintains with its arms industry and (neo)colonial world politics. Since the EU makes safe migration from so-called third countries almost impossible, people are forced to take life-threatening routes across the Sahara and the Mediterranean.

Spain is watching people being murdered at its border and is now even demanding that the NATO summit will establish the admission of “unregulated migration” as “hybrid threats”! So Spain wants to act militarily and even on NATO level against migrants and refugees!

Therefore, on the day of the beginning of the NATO summit in Madrid, we must all protest against this in front of the Spanish embassy in Berlin!

What actually is Europe and its borders? As we can see clearly at the moment: Externalborders are flexible when it comes to keeping people on the move AWAY.
They are constantly being pushed out further. People are being detained and forced into camps, long before the reach european soil. Fences are being build and deals are made with third-countries, to enact quicker deportations. A central actor here is Frontex, the european border- and coastguard agency of the european union.

Frontex doesnt just opperate on the european borders but also in third countries and makes sure that the migration control of the EU already starts far away from the national territory of the industrialized countries.
Fortress Europe is intercontinental. It doesnt need walls on its vacation-beaches. Instead militias such a the so called lybian coastguard or countries like marokko or turkey are being paid to keep people out. That is a disgrace!
The EU throws a lot of money at Frontex to enact air surveilance, so that people can be pulled back into the torture camps in Libya.
So that people in the Aegean Sea can be pushed back into turkey. Money for Frontex to cooperate with arms companies, to further militarise the borders.
Those who are arming, defending and extending the fortress Europe are criminals.

Migration is not a crime but a right for all! Lets be loud together and offer resistance;
Abolish Frontex and equal rights for all!

Say it loud; say it clear – refugees are welcome here!