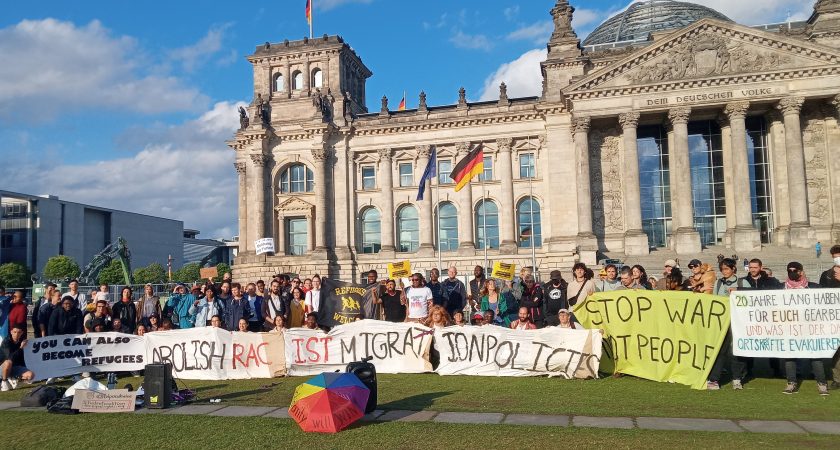 We tell you Abu’s story:
He fled from Cameroon to Germany 22 years ago. His application for asylum was rejected very quickly, as were almost all applications from African countries at that time. Since then he has been living in a village in Brandenburg with a “Duldung” and is threatened with deportation. For 22 years! For the first 15 years in Germany, he had no chance of attending a German course – German courses for refugees have only been available since 2015. Abu could get a full-time job here in Berlin; he has already applied for a work permit three times. The Foreigners’ Registration Office has refused each time – they want to deport him. The official in charge told him in person: “As long as I work here you will not get a residence permit”.

Now there is finally a draft for a law on a new right to stay regulation. After 5 years in Germany, rejected asylum seekers should also be able to get a so-called “ChancenAufenthalt”. Does Abu have a chance now? No. If the Interior Minister’s bill is passed as it is now, Abu will have no chance, just as with the previous right to stay regulations. This is because according to the draft law, refugees must obtain documents in order to clarify their identity.

The basic principle in German residence law is that papers are more important than people. With this principle, the authorities block family reunification, prevent marriages and partnerships, delay the admission of local Afghan workers and separate families through deportations.
This obligation to submit documents that meet the high standards of the German authorities deprives many people of their life chances. And often not only them but also their families, who are waiting for their support.

Deportation is also not possible without papers, because without a document from the alleged country of origin, it does not accept deportees. But for deportation, a ” laisse-passe paper” or any kind of paper produced in deportation hearings by corrupt officials of the alleged state of origin is enough.

That is unfair? Yes, the whole asylum and residence law is unfair.
The whole right of residence and asylum system pigeonholes refugees and migrants: Those entitled to asylum, those recognized under the Geneva Refugee Convention, those with subsidiary protection, and the undesirables: the tolerated, those “obliged to leave the country”… Each pigeonhole is associated with certain rights or restrictions on human rights.
This is wrong, because they are all refugees, they all have a right to protection.

Nobody flees voluntarily.
That is why we demand a right of residence for all!